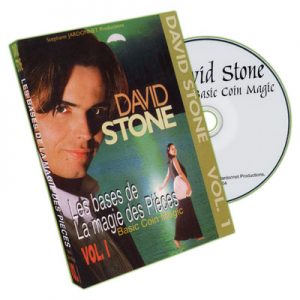 Dai Vernon referred to David Roth as the “greatest coin manipulator in the entire world.” On these special double-length videos, David teaches some of the techniques that earned him not only accolades from the Professor but from magicians worldwide. This is visual, miraculous coin magic taught by one the greatest practitioners the world has ever known. Learn from the best-it’s the ultimate!

Volume Four – Dinnertable Coin Magic/Coin Flourishes, Stunts & Wagers
In this volume, David Roth performs and teaches wonderful coin magic suitable for performance in a dinner setting using props one might find on a typical restaurant or dining room table. Also, David teaches elegant coin flourishes for all skill levels, followed by a number of stunts and wagers with coins that are guaranteed to fool your friends.