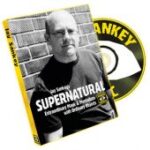 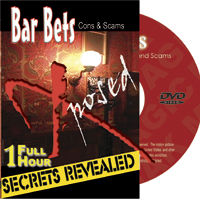 Supernatural by Jay Sankey View Clip This is without a doubt one of the most powerfully stimulating collections of magic and mentalism Jay has ever released! The sixteen killer routines include knock-out effects with steel bolts, monopoly money, ping…

This is without a doubt one of the most powerfully stimulating collections of magic and mentalism Jay has ever released! The sixteen killer routines include knock-out effects with steel bolts, monopoly money, ping pong balls, drinking straws, bottle caps, dollar bills, glass capsules, business cards, fortune cookies, paperclips, notepads, packing bubbles, finger rings and more! And most of them Jay is revealing here the very first time!

“This video is incredible. I’ve watched it about 7 or 8 times now, and it rocks every time. Delicate Balance is one of the simplest and most powerful effects that I’ve seen in a long time, and it takes minimal pocket space. It’s perfect for strolling. Forced Entry is also the best and the most practical solid through solid ever.” – Jeff S.

“SUPERNATURAL is the best DVD Jay has created in years!” – Martin T.

“I’ve been freaking people out with the mismade bill for years. But Jay’s ‘Mismade Monopoly’ is even better cuz you can give it away as a souvenir. Thanks!” – Bobby K.

“Alchemy Seltzer gets a better reaction than any trick I have shown people in the bar. A girl even gave me her phone number!” – Todd B.

“My wife bought me SUPERNATURAL as an early Christmas gift and I’m so glad she did. I’ve watched it four or five times and Jay has never been funnier. I laugh out loud every time. And the tricks are great too. So much better than 95% of the other stuff that so-called ‘professional magicians’ sell to the rest of us. Jay is a real pleasure to watch and learn from.” – Franklin A.

“I did Glass Menagerie for my boss and totally scared him. He even made me do it for his friends. I love it!” – Graham D.

“The tricks on Supernatural are almost too easy. But I’ve tried 3 of them so far and they all ROCKED.” – Terence G.

“I’m always looking for mentalism with ordinary objects and ‘Global Warming’ is a killer!” – Ross L.

“On Jay’s new DVD SUPERNATURAL there is a really fun trick called ‘Circumference.’ It’s really a production and a vanish of a ping pong ball. I showed it to my daughter and some of her friends and they LOVED it. I’m a semi-pro and I’m going to do it in all my kid shows over the holidays. Keep the great magic coming Jay!” – Oliver H.

“Jay’s ‘Forced Entry’ routine is the best penetration effect I’ve seen in years. I performed it with a borrowed straw and bottle cap at a party last week and everyone thought I was possessed! Worth the price of the DVD.” – Mark S.

“I call this DVD ‘SUPERNATURAL’ because it features some of my strongest magic and mentalism with natural, every day objects. I deliberately didn’t include any effects with playing cards or coins because sometimes you have to astonish people with something OTHER than cards or coins to feel like a real magician.” – Jay Sankey