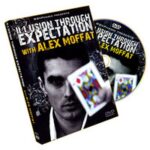 Illusion Through Expectation by Alex Moffat – DVD
$19.99 Add to basket

Alex Moffat reveals his most prized effects and takes you on a journey where he plays with your expectations. Remember, it is always expectation that creates the illusion…

Alex Moffat reveals his most prized effects and takes you on a journey where he plays with your expectations. Remember, it is always expectation that creates the illusion…

Guestimate – The Magician accurately predicts what number a randomly chosen card is positioned in the deck.

The Moffat Double â€” Fast and flashy. A superb barehanded production of two playing cards in the blink of an eye!

Catch Me If You Can – Head down, eyes closed. Get ready to catch a card as it’s fired out of the deck. Instant and memorable.

Barely Watched â€” A playing card vanishes in your bare-hands and then instantly appears under your watch! A beautiful sequence that will get incredible reactions!

Mate – A card is freely selected from the deck. Right from the start, in his hand, the entire time, and the magician is holding a matching card! No forces and a completely free choice!

Deal Or No Deal â€” From a shuffled deck, the spectator deals to his freely named card, then, unsuspectingly knows exactly where itâ€™s duplicate exists in the deck.

Coin Punch â€” Alex invented this when he was just fifteen. He still uses it in his professional work… it’s that good!

Sh4des of Dobson – A three phase coin Matrix routine inspired by Wayne Dobson’s version made famous on his television series “Itâ€™s A Kind Of Magic.”

Almo Wipe Clean – Inspired by David Williamson’s “The Wonderful Coin Vanish.” The hands are shown empty front and back, to then beautifully produce a coin.

Catch Us If You Can – Two chosen cards instantly fly up spinning from the deck, landing in each hand. Attention grabbing magic at itâ€™s best!

Reboxed – A deck is removed from its case only to instantly vanish and reappear inside the card case which is in view the entire time. Superb!

Trio – Three signed cards vanish from the deck. One appears under a glass, the second appears under the card case. Now, incredibly, the entire deck vanishes and then reappears inside the card case, which has been sitting on the table throughout the entire time. The kicker comes when the magician takes the deck out of the box, spreads it onto the table to reveal the third signed card face up in the deck! A masterpiece of misdirection that will become the talking point of your act.

Broken & Restored Glasses – A borrowed pair of spectacles is broken and restored in a split second! A brilliant opener for the strolling magician