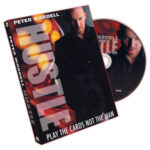 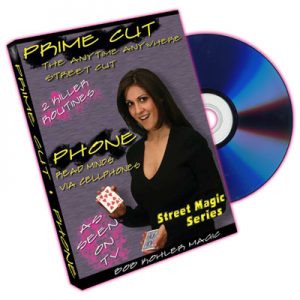 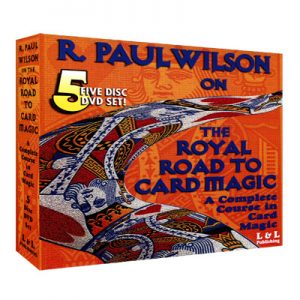 PLAY THE CARDS NOT THE MAN!

Hustle is a performance piece that looks at magic, fortune telling, card cheating and proposition bets. It ties these together with stories and characters, both real and imagined. Filmed in front of a live audience at a location in London, the performance gives an insight into the world of the one-man show.

For the first time, Peter’s live performance has been recorded onto DVD. This is them followed in the studio with a detailed explanation of each routine.

4 ACES
A four ace production leads into a beautiful set-up for the classic McDonalds Aces.

THE ALMANAC
The Soldiers Prayer Book revisited, this is a 13-card production with meaning and a demonstration of how to make magic more entertaining. A classic lesson in showmanship and presentation.

THE GREEN BAIZE JUNGLE
One of the most unusual Gambling demonstrations you’ll see. This routine includes shuffles, cuts, and deals, laced with poker lore.

THE BROAD OSSER
Three card monte with a torn corner finish. A great theatrical presenation of this street con.