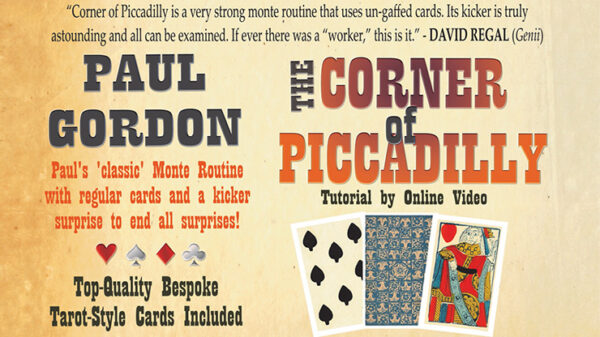 The Corner of Piccadilly (Tarot Size plus online instruction) by Paul Gordon $29.95 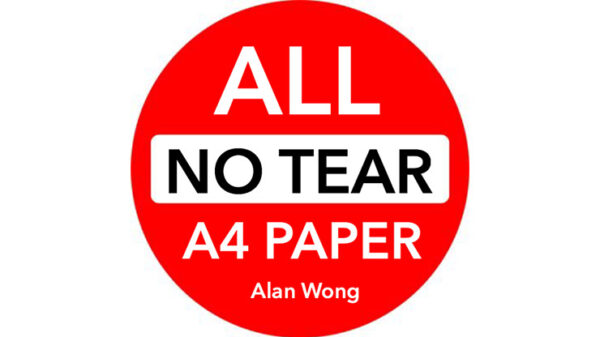 In 2008 John Breeds released his first book on entertaining children with magic and fun: Howto Create Kids’ Magic And Triple Your Income. Behind that intriguing title lay a blueprint forcommercial success in this field. Immediately upon its release it was widely hailed as a gamechanger,an important contribution to the literature on entertaining children, and it quickly soldout and went on to become judged a modern classic.

Now, 12 years later, John Breeds has observed how much things have changed in a decade;and he realised he had a lot more to say about the nuts and bolts of entertaining children withmagic, fun and games. So John has completely revisited and updated his book and added awealth of new material and advice. He has chosen to release it in the form of six separatebooklets, allowing the kids’ performer to select which aspects of the craft to focus on, each atan affordable price. Taken together as a set they comprise a text book on the various aspectsthat go to make the successful professional children’s entertainer in the 21st century.

Dotted throughout the text are tips and revelations earned from a lifetime of experience on thefront line entertaining children for a living: delighting real audiences and dealing with the pitfallswe all encounter on a daily basis. John Breeds clearly knows his stuff, and he’s packed thisbook full of generous pieces of advice and workable material.

Gain an insight into one of the UK’s great minds in the kids’ magic business; workingperformers who know a good thing when they see it will snap this series of booklets up.Between them, these titles offer you vital inside information on everything you need to build abusiness as a professional entertainer of children through magic, fun and games: whether youare starting out on the road to kids’ entertainment or are a busy pro who recognises thatdeveloping your act and performance should be a continuous process.

Revered children’s entertainers Silly Billy, David Kaye, Christopher Barnes, John Kimmonsand Terry Herbert had this to say about John Breeds’ publications: “This is an excellent workfor anyone who wants to entertain children, whether with magic or without. John will take youby the hand and teach you all you need to know, step by step. Enjoy!

“Like many in the industry, I became acquainted with John Breeds’ work via his seminal firstbook: ‘How to Create Kids’ Magic and Triple Your Income’. It was a real game changer andnothing less than a blueprint for success in children’s entertainment”. “You’re about to take atrip into one of the greatest minds in the kid show magic business!”

Titles In This Series:

1) Selling You! – invaluable sales tips how to get work and ‘sell’ yourself.
2) Open Persuaders – marketing techniques to get more work and earn more in fees.
3) Love Your Audience – how to build a successful working persona and build andstructure a professional comedy magic show for kids, including advice on staging,opening and closing your show.
4) Funny Tricks With Clever Bits – John’s professional effects, routines, apparatus, andfunny bits of business.
5) Never Out Action Games – the inside secret on adding a new product to your offering:games that will engage and amuse kids of all ages without any of the tedious eliminationthat kills a kids’ party atmosphere stone-dead. With this offering you can double yourfees and work less gigs in a day – a win-win!

John Breeds writes: To my surprise, it appears US magical entertainers have missed outon a super-simple money-spinner for performers. I’m talking about adding Games toyour magic show. Before you inwardly groan that this just won’t work, or because you’vealready tried these activities: maybe you’ve never tried ‘Non-Elimination Action Games’.The kids love these, and the title says it all: ‘Action’ means they’re completelyparticipative for the kids, and ‘Non Elimination’ avoids those dead spots when thoseeliminated in the games early on get bored and make a nuisance of themselves.

Adding Games to your package lifts your status way above the run-of-the-mill 45minshow that other entertainers offer. The Games aspect seems to be a closely guardedsecret among US performers. Now is your chance to discover and enjoy true success asa top entertainer, for less effort, doing one entire party a day rather than running around2 or 3!

Towards the end of my long career 95% of my bookings were for my ‘Whole PartyPackage’ (which included Magic, Games, Dancing and Prizes).

Word soon spread and this led to Christmas bookings for the Duke and Duchess ofMarlborough at Blenheim Palace, for their son James Spencer-Churchill, and PrincessDiana and her son Prince Harry.

I’m mentioning this not to brag but to emphasize that among important circles my showbecame known to be different, original and entertaining fun for all. But you too can aspireto finer levels, higher fee income and reputation by aiming to be different rather than justanother middle-of-the-road magic man.

“Love Your Audience”
In the first release of these eagerly awaited sequels, John shifts focus to perhaps the mostimportant aspect of a successful performance: building a great relationship with youraudience.

For professional children’s entertainers, this is an absolute goldmine. ‘Love Your Audience’covers such a wide range of pro insights, including:

The real secret of how to make kids laugh – Warming up an audience;The Balance of Bits of Business and Strong Magic – Staging Your Show;Developing strong routines – A versatile magic box for all seasons;Building a stunning backdrop – PA and sound – Closing the show;The Real Secret of Success (including The Infamous Red Tongue Trick!)… and so much more.

Starting with the most complete exploration of the classic ‘Silver Sceptre’ ever committed toprint; another classic ‘The Miser’s Dream’ gets a complete, refreshed overhaul.

One of John’s standout comedy props when he was a noted dealer, ‘Don’t Ring That Bell’ ishere simplified and explained in full, along with a different play-let ‘All Aboard’ that willgenerate mayhem onstage; in complete contrast there’s the utterly charming ‘I Wish, I WishCompetition’.

Also John’s compete reworking of Kovari’s ‘Dimishing & Enlarging Gloves’; possibly John’sfavourite in the booklet is the simplest: his routine for ‘T & R Tissue’; ‘Kids Comic Cuts’ is purefarce with a haircut!

Threaded throughout the material like a skein of gold is every inside track on making theseroutines REALLY come alive: making the props, handling, ideas, gags and kicker finishesgalore.