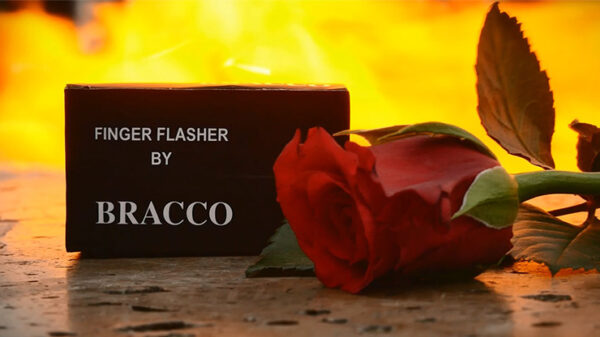 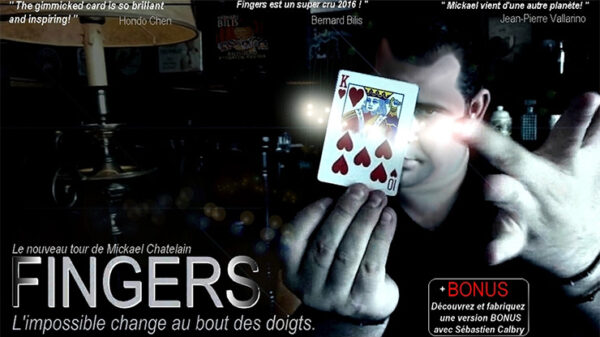 A card that changes and vanishes into thin air!

Here’s what your spectators and even YOU will say the first time you see FINGERS.
You know about flap cards? Well, forget all that for the time being as FINGERS is not a flap card as you know it.

Today proudly offered to you is Mickael Chatelain’s latest creation:

FINGERS – The impossible change at your fingertips!

Here is the exact routine that you’ll be able to do a few short minutes after learning the secret:

Take your deck from the case and offer the spectator a FREE choice of card.
The spectator can change his mind as much as he likes as there is no force. The choice is 100% free! Let’s say the choice is the Ace of Hearts.

The spectator signs the card which is then lost in the deck. Shuffle and cut a few times, if you choose.
A magical gesture… and a card, ONE card, mysteriously turns face up in the face down deck.
Spread the deck between your hands to reveal the face-up card. Unfortunately, it’s the wrong card, which the spectator won’t hesitate to point out! The face-up card is the King of Spades.

No problem, you’re a magician!

Hold the King of Spades at your fingertips between the thumb and forefinger, fully visible to the spectator. Aside from the King, your hands are absolutely empty.
The right hand, the one holding the King, doesn’t move as the left hand passes quickly in front of the King.

You’ve got to see it to believe it…
Just as the left hand begins to pass in front of the King, the King changes to the Ace of Hearts, the freely chosen card.

More than a simple transformation…
The King seems to evaporate, to dissolve into thin air to make way for the chosen card.
A phantasmic sight as the wrong card vanishes without a trace.

And it’s really the very card the spectator chose as it still bears the spectator’s signature!
Show it front and back and hand it out to the spectator, if you’d like. It’s an ABSOLUTELY ORDINARY card.

Forget everything you have ever seen or read. Watch the demo video over and over again.

Remember these important points:
– Nothing to add. The gimmick takes care of everything.
– No manipulation.
– No force. The selection is truly free.
– The change is automatic.
– Instant reset.
– Video explanation included.
– The change can take place in full view by simply blowing on the card.
– As a BONUS, we include Sébastien Calbry’s version.

A signature effect from Mickael Chatelain