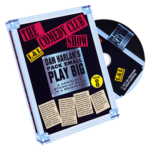 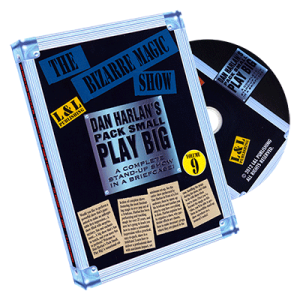 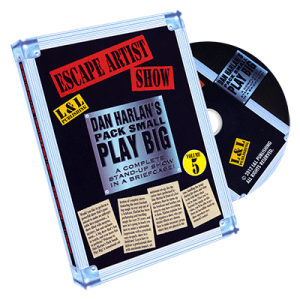 The Comedy Club Show performed on this volume is a hilarious presentation of strong magic and outrageous comedy that fits in a small briefcase. Though the central theme is material suitable for adults in a night club or comedy club setting, there’s a wide variety of plots and methods in play that will interest magicians of all types.To begin the show, Dan performs “Snort Wax” during which he offers to not only vanish a large candle but also let the audience in on how it’s done – which he proceeds to do by apparently inhaling it up his nose. He then continues in a long – but very funny – series of playing card gags, ending with an offbeat version of a time-honored comedy card effect where the entire audience apparently reads an assisting spectator’s mind. Harlan winds up the first part of the show with something he calls the “World’s Saddest Trick,” a side-splitting presentation for a simple handkerchief vanish.

Dan then demonstrates what happens when you chew two popular candies at the same time in “Professor Mouthcoil” as he produces a voluminous amount of colored paper from his mouth. Turning to mindreading, his gag prediction of a freely-named grocery item is turned on its head when he actually produces the real item from his case. To finish this part of the show, he performs an impossible and startling vanish of the grocery item just when the audience is convinced that the entire thing is a put-on. In “Short and Long,” Dan adds a very ribald presentation to a classic of magic, the Professor’s Nightmare.

Then, in “Burnt to the Core,” the corner is torn from a borrowed twenty dollar bill and is completely destroyed during some very funny by-play with the audience assistant. It’s then found unharmed in the middle of a knotted handkerchief (and of course, the corner fits.) The bill is vanished once again (will the spectator never learn?) but is found this time in the middle of a small piece of rope that the audience member had in his pocket since taking the stage (and yes, once again, the torn corner fits!)

To finish the show, Dan performs “Cheez Wiz,” a comedic tour-de-force that must be seen to be believed. In a nutshell, Harlan proposes to perform the classic Card Between Panes of Glass trick but unfortunately, he doesn’t have any panes of glass – or cards, for that matter. He then proceeds to perform the trick using standard grocery items – slices of bread instead of panes of glass and a package of cheese slices instead of cards. Much hilarity ensues as a “card” is selected, “signed” by a spectator – with a condiment, of course – and then vanished using…what else?…a banana. It’s a great finish to a show that’s equal parts funny and amazing.

Enjoy the show, then prepare to learn the secrets of a master as every nuance is revealed. Soon, you too will Pack Small, and Play Big!